Young people from secondary schools in Anglesey and Gwynedd have been taking part in Pontio’s learning and mentoring programme Profi over the last few months culminating in a Dragon’s Den style event held at Pontio, Bangor University’s Arts and Innovation Centre recently. 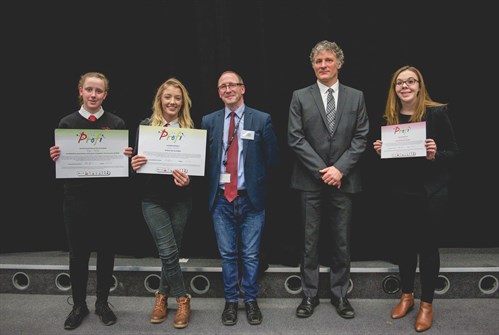 Victory was claimed by Ysgol Tryfan with a team comprising Katie Eaglestone and Awen Roberts. The winning team developed a project in response to a brief set by Menter Iaith Môn, challenging them to promote the use of the Welsh language socially amongst young people by using digital and/ or social media. Katie and Awen’s idea was to create podcasts in Welsh aimed at young people.

Helen Thomas, Chief Language Officer, Menter Iaith Môn: "We are extremely pleased that we have been able to participate in the Profi project this year . It's been a very positive experience to see innovative and exciting ideas are being developed in order to encourage further use of the Welsh language amongst young people, one of the aims Menter Iaith Môn. We 're now looking forward to developing the plan to its full potential . "

The team successfully pitched their idea to a panel of judges, comprising representatives from Pontio, Horizon Nuclear Power, Santander Universities UK, Siemens Healthcare and Dŵr Cymru to win £500 for their charity to put their ideas into action.

Profi project manager Elen Bonner said: “Its wonderful to see so many organisations from the public, private and third sector come together to support local young people, and the passion the young people have to make a difference in their communities is an inspiration to us all.”

Dr Fraser Logue, Vice President and Managing Director of Siemens Healthcare Diagnostics Products Ltd said: “We are delighted and proud to support Profi again this year.  As a major employer in North Wales, we believe it is key in providing us with the opportunity to engage with local schools and the wider community to support young people in their future development.”